The median home price in Tacoma by neighborhood 2020

This post has been revised and updated with Tacoma real estate prices for 2021 here.

How much does it cost to buy a house in Tacoma? Tacoma has been an attractive choice for buyers because of our relatively low home prices. Those low prices have increased quite a bit in the past 5 years.  The 2020 median home price in Pierce County is $375,000 and the average home price is $421,327. As we pointed out in our post about what you get for the money in Tacoma’s most affordable neighborhoods, the median home prices of Tacoma’s neighborhoods vary quite a bit from one end of the city to another. Most of the published available information from the Northwest MLS (which is what all the newspapers and real estate agents use) is by city or county. Every January we painstakingly run a report for dozens of Tacoma neighborhoods. We hand draw the borders of the neighborhoods to get the most useful median home price data for you. It takes forever, honestly.

That’s why we created this post to break down the most recent median home price information for each neighborhood (and micro-neighborhoods) in Tacoma. Once you know how much you can comfortably spend you can use this list to find which neighborhood you like best:

Fern Hill is located in the South End of Tacoma between Pacific Avenue and I-5, before you get to Parkland. Fern Hill is affordable, convenient for commuters (located close to I-5 and 5-12), and totally charming.

Parkland is most famous for being the home of Pacific Lutheran University. Located just off highway 5-12 where the southernmost city limits of Tacoma meet Spanaway between Puyallup and Lakewood. Parkland is incredibly convenient for commuters with most homes being within less than 10 minutes drive to highway 5-12.

People living in Downtown Tacoma neighborhoods tend to feel a strong sense of ownership which has lead to an almost village like vibe amongst the people who have settled there. Getting to know people is not hard, and there are few barriers to participating in civic and community life.

Teeming with historic homes, Hilltop is a great place to find a historic Tacoma home. Located just above Downtown adjacent to Hillside/McCarver, Hilltop has a great location for getting around the city and has easy freeway access, too. Hilltop has a vibe and rich history all on its own. In recent years Hilltop has quickly become the place to be.

Is it Downtown Tacoma? Is it Hilltop? Really it’s both, and some would argue that it’s not a neighborhood of it’s own. We’d really classify it as a micro neighborhood since it’s distinctive from the Downtown and Hilltop- the two neighborhoods it’s straddles on the hill between UWT and Hilltop . If you drive down South Yakima and look around at about 21st, you’ll see what we mean.

Tacoma’s 6th Avenue Neighborhood is the quintessential neighborhood for people who want to live in a community of affordable homes that are located in a vibrant, thriving, walkable community. Located in Central Tacoma, between Proctor/UPS, West Slope, and Hilltop, 6th Ave has the highest concentration of restaurants, coffee shops, bars, and shopping in the city.

Marguerite’s FAVORITE! Long marketed as the “Theater District” by developers and the city, it’s more recognized by locals as “St Helens” or even “the Triangle District” by some. Whatever you decide to call it, it’s the beating heart of Downtown. This community has turned out to be one of it’s most thriving and connected communities. Located in the area of Downtown Tacoma that is south of Division, North of 9th Street, and South of Tacoma Ave just kind of has it’s own feel. There is a good mix of renters and owners, and a lot of new locally owned Tacoma businesses. It’s easy walking distance to the Stadium Thriftway for groceries, and located within 5 minutes of two different freeway on-ramps for commuters.

The Wedge District is located between Division, 6th Ave, and South 4th St. It’s a tiny district of large historic homes and just a few streets.

Ok so technically Fircrest is its own city but it’s surrounded by central, north, and south Tacoma so we are just gonna throw it into the Central Tacoma list.

Located between Orchard and the West Slope, the West End has newer homes than many other neighborhoods in Tacoma, with homes built in the 60’s, 70’s, 80s, and even some newer homes.

North Slope Historic District is home to some of Tacoma’s most beautiful and historic homes. Nearly 80 percent of the homes were built prior to 1930. When the city made zoning changes in the 1950’s that allowed for some of the older homes to be torn down and replaced with apartment complex the residents worked together to create one of the largest historic districts in the country.

Again, the city of Ruston is very technically not in North Tacoma because it is its own city- but functionally we think it belongs on this list!

Northeast Tacoma (also known as Browns Point) is located across Commencement Bay from Downtown Tacoma. Depending on where you’re driving from, commuting to Tacoma will take about 15-20 minutes. If you’re commuting to Seattle, Browns Point is as far north as you can live and still be in Tacoma.

Three Bridges is a tiny neighborhood in North Tacoma at the nexus of Proctor, Old Town, Stadium, UPS Neighborhood, and North Slope. Located in the area around North 21st between North 12th Street and North Alder, and so named for the bridges that span the deep ravines (teeming with deer!) that run through the neighborhood.

Years ago Puget Sound University changed their name from University of Puget Sound, but that doesn’t stop Tacomans from calling the neighborhood around the private liberal arts college “UPS.” The UPS Neighborhood is known for tree lined streets, craftsman homes, and lovely parks.

The West Slope of Tacoma lives up to its name. Entire neighborhoods were developed along the hillsides facing Gig Harbor, Fox Island, and the Olympic Mountains.

Proctor is a picturesque neighborhood in North Tacoma. Proctor has tree lined streets, cute shops, restaurants, and beautiful historic homes. Some homes in Proctor have views of the Puget Sound and Mt. Rainier.

Stadium is a perfect mix of everything that makes Tacoma wonderful. From the iconic Stadium High School to the beautiful old historic homes that surround it- Stadium has it all. Parks, great local restaurants and coffee shops, some of the most beautiful homes and tree-lined streets in the city, and a bustling business district.

South Tacoma is the area West of I-5, South of Highway 16, East of University Place, and North of Lakewood. Home to South Tacoma Way, the Tacoma Mall, and neighborhoods of homes from the historic to the brand new.

Want to learn more about how to buy a house in Tacoma? 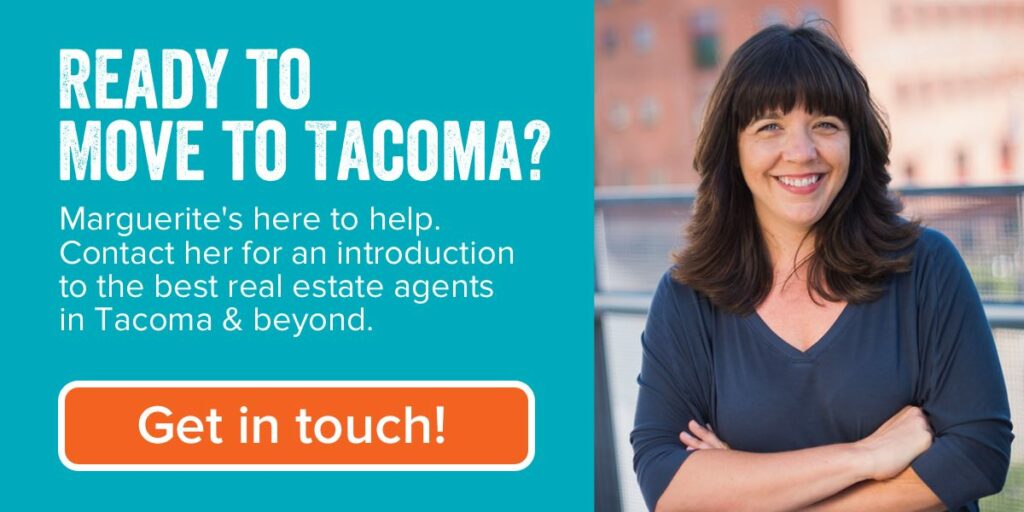