Would a Regional High Speed Rail System Be Good for Tacoma?

A recent article in CityLab caused a sensation across the PNW. Titled “The Case for Portland-to-Vancouver High-Speed Rail,” the article discusses the virtues of building a trans-national high-speed rail line that connects Vancouver B.C. and Portland, Oregon with a train traveling 250 miles per hour.

Could Tacoma see high speed rail connecting it to Vancouver, Seattle, and Portland? 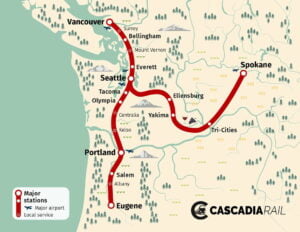 This map is from CascadiaRail.org

According to the CityLab article (which cites a presentation by Washington State Secretary of Transportation Roger Miller), the Northwest seems to have the right ingredients for successful high-speed train service. Vancouver, Seattle, and Portland all have strong economies, short distances, committed political leaders, and private-sector encouragement.

Would high speed rail connecting Vancouver to Portland be too expensive?

The estimated cost of a Cascadia Rail is about 50 billion dollars.

This would for sure be incredibly expensive, but when it comes to public infrastructure projects, this might be the right kind of expensive. For example, adding another lane to Interstate-5 from Portland to Vancouver would cost about 108 billion dollars. As Miller said in his talk, “Half of that invested in ultra-high speed rail and it’s two hours. That’s game-changing stuff.”

Would this super fast train be good for Tacoma? Would it even stop here?

According to a vision outlined by Miller and the Cascadia Rail org (visit the website here to learn more), the train would stop in Vancouver B.C., Surrey, Bellingham, Mt. Vernon, Everett, Seattle, Tacoma, Olympia, Centralia, Kelso, Portland, Salem, Albany, and Eugene. There’s even the potential for a branch that goes through Central Washington out to Spokane.

Connecting Tacoma to the rest of the region with a 250 mile per hour train would be an incredible opportunity for the city. One of the big advantages would be that the ease of transportation to other major local cities would make Tacoma much more attractive to employers and industry. The downside of this ease of connection, as Tacomans well know, is more folks moving here which means the potential for further increased housing costs.

In the end, in Tacoma and across the region, it’s hard to deny that a lot of people would benefit from a high-speed rail system. It’s definitely still in the dream stage, but with the Washington State Secretary of Transportation pushing it and feasibility studies being funded by the legislature, it’s definitely a thing. “High-speed rail works in Europe, it works in Asia, and it could work here,” says Miller. “There have been awful attempts at it around the country. We in the Northwest have the capacity to do it right, if the vision is there and we go about it the right away.”

Read the original article in CityLab.

UPDATE June 2022: Axios is reporting that Washington state is ponying up $150 million to plan a high-speed rail line connecting Seattle, Portland, and Vancouver, British Columbia — although there’s still a long way to go before the project becomes reality. Learn more in their article, “A first step towards high speed rail in the pacific northwest.“