in
East Side, Podcasts, St Helens, Tacoma News and Blogs

We’re glad to share this interview with local business owner Brock Leach. Brock first moved to Tacoma’s East Side 15 years ago. In addition to being a college professor, Brock and his friends opened The Mix in Tacoma’s St Helens Neighborhood 7 years ago. We talked about how the East Side and St Helens neighborhoods have changed and transformed – and the roles that bars such as The Mix and Top of Tacoma have played in that transformation.

Brock talks about how he sees The Mix as a part of the community, and how community support has made the bar successful for 7 years. Originally known as Ida’s Pub, Brock and his friend Jonathan bought the bar and transformed it into an anchor for the surrounding neighborhood.

“We wanted to carry through that ‘Tacoma feel’ because we’re basically a small town.” says Brock. “People come here and one of the first things they talk about is the people that they meet. It’s probably the best part we have about our city. It’s the people here that make it amazing…”

The Mix is a gay bar, but also a true community gathering place. “Of course Jonathan and I were both gay, and we had a certain style and taste and everything like that. It basically kind of became a gay bar…” he says. “People tell me all the time, ‘this is my first time at a gay bar and I’m having a great time!'”

Out in the Park Official Page

Over the Moon Cafe 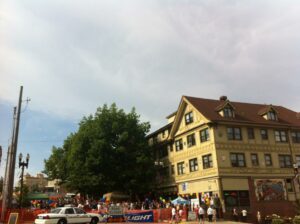