We Asked Tacomans What They Like & Dislike About Tacoma. Here’s What They Said

in
Posts, Tacoma News and Blogs

Mural featured in cover image is by @rickylovespainting.

It turns out that a fair amount of people find our “scruffiness,” “rough and tumble” character, and “our non-mainstream culture and attitude” absolutely charming, and we wouldn’t have it any other way.

Residents’ pride in the community.

People love the sense of belonging that they have here, and several people commented on the sense of community they’ve found in Tacoma. Many Tacomans seem to feel that Tacoma is a very giving community, and a lot of people want to help where they can. Folks also love community events like Monkeyshines, night markets, First Night Tacoma, etc.

“Love that the parks and arts make efforts with inclusion and reflecting Tacoma’s diversity,” shared one person, and several others who took our survey echoed this sentiment.

How hip Downtown Tacoma has become in the last decade.

“I have never seen downtown be on the verge of such a massive boom. When I was a kid, downtown was a dump. Now it’s about to explode,” someone shared via the survey. Another person added that “Downtown is so vibrant; night markets, breweries, farmers markets, shopping, new restaurants, oh my!”

Diversity of people and belief.

Tacomans really seem to appreciate the diversity we have in our city, and one survey submission said they loved “The combination of blue-collar jobs, higher ed, arts and entrepreneurship” and the “economic and racial diversity.” Survey submissions commonly described people as being “down to earth,” “friendly,” “working class,” “no-nonsense,” and “liberal without being snobby.”

It’s easy to get around.

People talked about loving the small-town feel and the fact that there’s “no traffic” (well, at least when you compare us to some of our northern neighbors…).

Ok, we were a little surprised to see so many people comment on liking the weather with all of the gray/drizzly weather we get here (some people even love the opportunity to “get cozy” in the winter). Plus, Tacoma summers are truly gorgeous—summers in the Puget Sound are unlike any other. And we have a very mild climate compared to a lot of other places in the country.

“It’s a great place to raise kids,” shared one Tacoman. “There seem to be more and more kid-friendly restaurants, coffee shops, and a great online mom community.”

Tacomans especially called out Point Defiance Park as a gem, and one person raved about the parks, saying that “Metro Parks does a phenomenal job with upkeep, design, programming, development, and community outreach… all the things!”

Ever increasing things to do.

“The array of interests, events, and activities available to participate in is outstanding,” shared one Tacoman.

The fact that Tacoma offers all the “big town stuff” you want, but still has “a smallish town feel” was a very popular sentiment on the survey. “It’s small enough that I run into friends around town,” shared one person, and there’s “opportunity to make change happen.”

The fact that Tacoma’s not Seattle.

Several people said their favorite thing about Tacoma was the fact that it’s not Seattle. Do we have a *little* chip on our shoulder? 😉 Maybe, but whatever. People say “we are what Seattle was 30 years ago,” and “it has all the perks of Seattle but small-town feel.”

The food and beer scene.

This is one aspect of Tacoma that is consistently raved about, and people said time and time again that all of our great bars and restaurants were a big perk of living here.

Location on the South Sound.

People love having city amenities right on the water. Being close to the mountains and other outdoorsy opportunities not too far outside of the city is another big perk for many Tacomans.

This is a tricky one, and it popped up frequently on BOTH our “like” and “dislike” about Tacoma lists. As with many things in life, growth is a double-edged sword, but a lot of people are embracing Tacoma’s transformation. They mentioned loving the “Influx of new residents, shops, and restaurants” and Tacoma’s “affordability.” Many people who took the survey are also really digging “the renaissance that continues to take place.” One 28-year Stadium High School alumni also shared that “I love seeing the progression and transformation… while maintaining authentic and connected community.”

This was a *very* common response. People really cherish how small businesses and startup companies are “enriching our economy & keeping community dollars local.”

Many people also feel there’s been a renewed interest in Tacoma’s history as of late, and people also express a lot of appreciation for the historic buildings and neighborhoods that we have.

There were *so* many more reasons why people like Tacoma shared in the survey, and these are just representative of a few of the big themes we noticed. Now it’s time to take a look at what Tacomans aren’t so hot on right now.

This one is by far the most popular answer people gave on the survey. Tacomans dislike the way the homelessness crisis is being handled (or, to many who responded to the survey, not handled at all). “The homelessness issue is a growing concern. It feels like at this crazy time of growth for the City, we have a huge opportunity to address affordable and stable living needs in a stronger way than Seattle did,” shares one person. Another Tacoman said that, “We need more housing and mental health services for homeless. It’s awful we let people live this way.” Similar sentiments were echoed several times throughout the survey.

This was the second most popular answer in the “dislike” list for Tacomans. Many survey participants are frustrated by the amount of property theft, petty crime, and violence they either experience or hear about.

Many people are frustrated by the lack of “good-paying jobs” and don’t like the “lack of cohesive vision for building and/or attracting quality employers and business.” One person shared that they feel Tacoma has a “weak job market relative to the costs. Feels like it’s becoming a feeder market for Seattle instead of a place with its own identity.”

As Tacoma transforms, this is a serious ongoing issue. “The lack of affordable housing, the new high-rise apartments that are too expensive for lower income folks, the road construction. It used to be affordable to live here. I couldn’t afford a place on a similar salary that I was making when I first moved here,” says one Tacoman.

“The disparity between the rich and everyone else. It’s too expensive to live here, there’s no rent control, and no tenets union.” Follow the Tacoma Tenants Organizing Activity—they’re working hard to organize renters and impact policy.

“All the people moving in droves here and changing the Tacoma feels,” one person shares. This one is of course closely intertwined with many of Tacoman’s other dislikes (like affordability, homelessness, gentrification, etc.).

According to some, the city is demonstrating a “shortsightedness on transportation,” and many wish there were more public transit options. There are a lot of opportunities for transit advocacy in Tacoma—follow Chris Karnes on Twitter to stay in the loop.

This refers to the Puget Sound Energy Liquefied Natural Gas facility. One resident’s dislike includes “City Council’s refusal to demand safety and environmental data on unpermitted LNG plant and increasing oil and gas presence, while taking lots of $ from industry. Quit ignoring citizens.” Several others expressed their concern over LNG.

The ICE detention center at the Port of Tacoma.

The Tacoma Northwest Detention Center has been the topic of heated debate especially in recent years, and many dislike that it’s in Tacoma. Follow Northwest Immigrants Rights Project and support their work in Tacoma.

Potholes, potholes, potholes. Tacomans were very vocal on the survey about how sick of potholes they are! The “lack of bicycle infrastructure and haggard roads” was another common dislike.

“Some [neighborhoods] can’t tear down fast enough to rebuild, others are starved for basic needs,” said one person. Another respondent shared that they dislike the “dense development in already developed neighborhoods while underdeveloped areas of the city continue to deteriorate.”

A common response was the influx of people coming from Seattle—as Seattle becomes more and more expensive and people get priced out, many head to Tacoma. “Damn Seattle people, developers, and others with too much money,” said one Tacoman.

One person shared that they dislike the  “income equality that contributes to homelessness and hunger and sharp political divides that don’t acknowledge our systems’ complexities. No easy solutions, despite social media sound bites.” Another Tacoman shared that they’re frustrated by the local government’s “lack of courage” and dislike the “city government’s reluctance to make difficult decisions.” 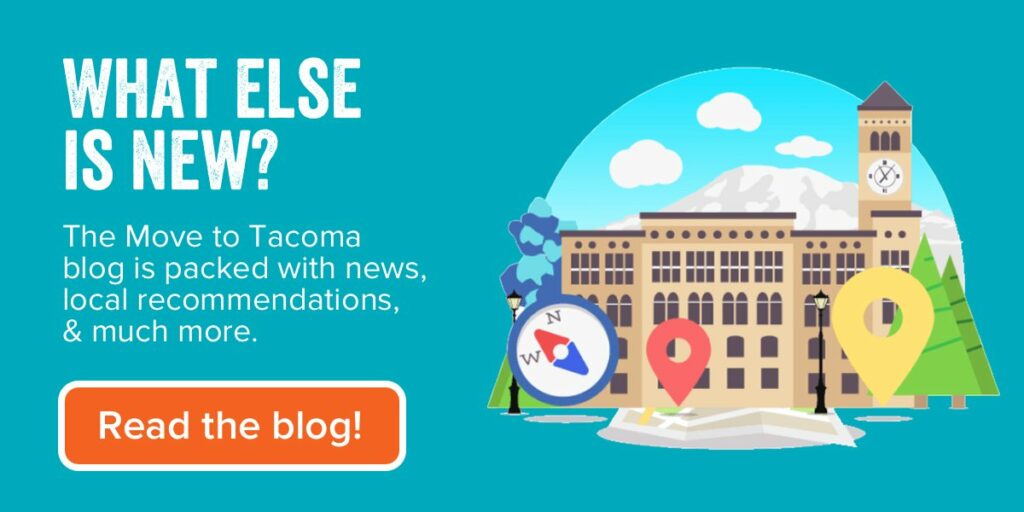