Did You Miss the First Adult Civics Happy Hour? Check Out Our Recap!

Last week, Move to Tacoma hosted “Adult Civics Happy Hour with Nate Bowling and Erik Hanberg” at Black Kettle Bites & Brew in Downtown Tacoma. This event was all about re-learning (and maybe learning for the first time!) everything we learned in civics. How does local government work? How can you influence and make change in local government?

We were blown away by the interest—thank you to everyone who joined us and expressed interest in attending another event. The next Adult Civics Happy Hour will be May 25th, but we are still figuring out location and topics. If you’d like to be surveyed about what the next event should be like and be notified when tickets are available sign up here.

Check out a quick recap of the event here:

We also had the event on Facebook LIVE—you can watch and learn from experts Nate Bowling and Erik Hanberg here:

Also, thanks to KNKX for featuring the event in a segment! You can listen to the clip and read the accompanying article “Unpacking Government: What Does Civics Education Look Like In Washington?” here.

Here are a few tweets from the event:

“Change happens in real life, not on Facebook.” #TRUTH #ACHH253

We don’t realize how powerful we are… But we have to pay attention…know your local government reps. – @nate_bowling #ACHH253

@erikhanberg and @nate_bowling discussing the importance of being involved in local politics (and the virtues of Pinot in a can). #achh253 pic.twitter.com/DRGeRqvzjk

#ACHH253 we should pay attention because we are impacted by local government more than state or national.

Many people don’t participate in primaries – but that’s where important decisions happen (Reminder, we vote by mail) ???? @erikhanberg #achh253

YOU can run for office! Women of 253 YOU are MORE THAN CAPABLE and PREPARED! #achh253

How many cities have events at a bar to talk about local politics? I’m betting not many #ACHH253 https://t.co/Xk5D3I4Ai2

If you don’t get a response from your city council member show up on a Tuesday’s, check calendar for public comments dates. #achh253

Really adulting tonight. Grew up poor & politics never discussed in my home. I make an effort to be involved & informed. #achh253

“We built the trans continental railroad during the civil war faster than we’re getting light rail from Seattle to Tacoma.” #achh253

.@hiitskim Limitless power when you get a room of Tacomans together. Now we got to make sure that room looks like all of Tacoma. #ACHH253 #diversity

You can also see our Facebook photo album from the event here! 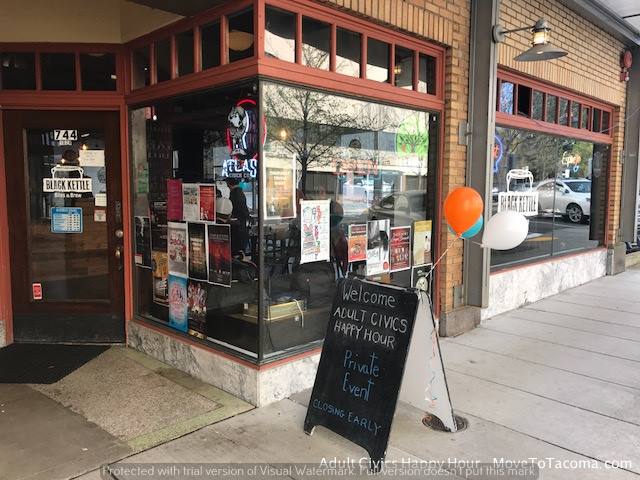 The next Adult Civics Happy Hour will be Thursday, May 25th!

If you’d like to be notified as soon as tickets are available please share your email and you will be the first to know. We will also be sending out a survey about content and venue and we would love to know your thoughts.